View journal entries from other months

In August 2013 I moved to Plainfield, Massachusetts, to the foot of Deer Hill/West Mountain, on the edge of the valley of the Westfield River. The journal below is my story of getting to know my new home: the land that stretches up the side of the mountain behind my house.

Snow still covers the ground under the trees but it’s no longer clean, pristine and glittering. The surface is dark with twigs and needles; fallen during the winter; left behind now by the melting snow. The stream is clear and cold, swift and loud: melted snow and rainwater flowing swiftly down off the hills. The snow has melted back as the stream takes more room, but the banks are still white. Beyond the stream the forest is still and damp. Sap may be flowing inside but on the outside they are still bare, cold winter trees.

The air is January-cold, the sky a cloudless winter-blue, and the snow so hard my feet often leave no mark. The sun is bright in the clear air, flooding the trees and icy snow with warm light. But in the shade under the hemlocks the light is cold and blue. Silence gives way to chickadees and woodpeckers, blue jays and trees creaking in the cold. Sunlight on the stream reflects off both the rippling, flowing water and the rough new ice crystals spreading across the pool.

From my sunrise lookout the forest floor is still a sea of white rolling away in all directions: hard and cold, sparkling and bright. But here and there through the forest are a few bare patches on exposed south-facing slopes. Last year’s leaves lie exposed; flattened and dull after the long winter. Where there’s snow, a hollow has formed around each tree trunk and bush stem, and even around the briar stalks; the sun-warmed trunk or stem melting the snow to form a halo of space. Sometimes it’s just a depression in the snow but often there’s a little bare ground right close to the trunk. Spring’s arriving, but slowly.

A pair of foxes drifts silently by down below me, dark against the snow; moving slowly for foxes, trotting not running, but covering the ground swiftly none-the-less and vanishing amongst the trees.

After another cold night the stream flows under fresh, new ice. Feathery crystals reach out from the banks where the water moves more slowly, while the cascades are covered in thick sheathes of clear, bright ice. Below is the trapped, turbulent, flowing water; beautiful behind its self-created window of ice.

Gray clouds slide by overhead. A few gaps open up to reveal blue sky beyond and white-edged clouds. Then gray clouds return, at least for a while. With the hints of blue sky came a breeze, rustling the beech leaves and sliding through the treetops; then stillness and silence returned.

Down at the stream, ice once again covers most of the pool and the small cascade at its head is once again sheathed in knobby, bright ice. On another part of the pool, near where a small trickle of water flows in, the surface is partly covered by a tracery of fine, thin ice. Slightly thicker ridges, like contour lines, mark the stages of the freezing process, and small gaps opening up between the lines reveal the melting process: a small story told by delicate, beautiful patterns in the ice, soon to be gone as the day warms up.

The crunch of my footsteps on the hard, brittle snow reverberates through the forest; it’s yet another deeply cold, still morning, more like January than March. The forest feels frozen, still, empty; waiting for the return of warmer weather. In recent weeks the stream had started to open up: holes in the snow exposing the cold flowing water below. But now ice has stretched out across many of these openings. I can see and hear the water flowing below, but it’s distant, untouchable; withdrawn again from the cold.

Each day I come on more remains of the dead deer: fur scattered across some hollow in the snow and tracks, probably coyote, showing where some part of the deer was pulled apart and consumed. These remains seem to emphasize the cold, empty stillness of the forest.

An image from last fall; a reminder of what the quarry looked like as winter approached. 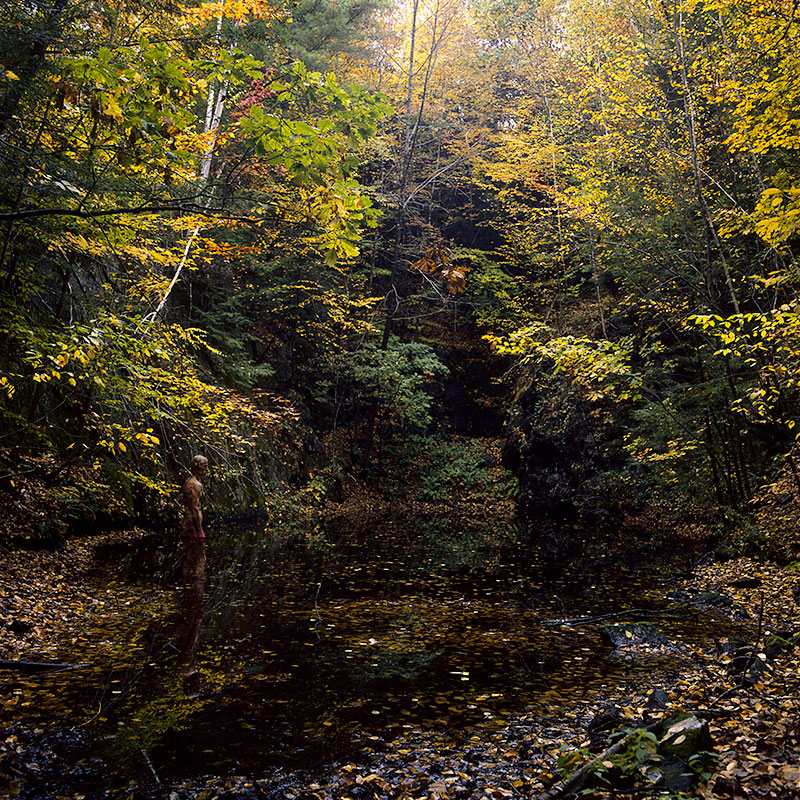 Walking in the woods east of the stream, just a few hundred feet from my house, I come upon a tattered piece of deerskin; thick fur on the outside; picked clean and white on the inside. It’s yet another remnant of the dead deer, but hundreds of feet from the remains I found yesterday. Just as I’m continuing on my walk I see a red fox just 20 feet away. He seems aware of me but not particularly concerned. While I remain still he trots delicately off through the forest but then circles back a couple of times, once coming within ten feet of me to sniff around a tree. The bit of deer hide seems to both scare and interest him more than I do. Grabbing onto it he tugs momentarily but then jumps back as if scared of it. After repeating this a number of times he’s moved it a few feet and he goes to where it was to pick a few bits of something edible out of the snow. Then he trots off through the trees, his coat sleek, glossy and beautifully red. Foxes are in the dog family, but his movements have none of the heaviness of most dogs. All winter I’ve been seeing fox tracks but this is the first time I’ve seen the fox.

The trees’ shadows, dark and sharp-edged, slide slowly across the rolling seascape of snow. The sun’s just risen and the long shadows trace out on the snow the gentle, upward reaching curves of the bare trees. It’s minus eight Fahrenheit and one of the coldest mornings of the winter, but birds are calling all through the forest. Spring draws irresistibly closer but the snow’s still deep and life’s still hard in the forest.

A light dusting of snow fell two days ago and already it’s dense with tracks: fox, squirrel, deer, rabbit, and more. Looking ahead I see a place of great activity. Thinking it might be where a deer bedded down, I go closer to investigate and discover instead that I've come on the remnants of a deer's death; eerie and silent on this bright, sunny morning. The blood-flecked snow has been pounded down by countless animal tracks; the last left by crows searching for anything edible left. An acrid smell lingers in the air. Long tufts of black, gray and white fur, from the deer's thick winter coat, quaver in the breeze as if still possessed of some life force. In the midst of it all is a whole organ resting gently on the snow; red and rounded, looking nearly untouched except at the top where it was ripped from inside the deer [I photographed the organ later and showed it to someone who knows more about anatomy and they thought it might be the caecum (part of the deer's stomach)]. There are no bones. The deer was killed somewhere else and what I'm seeing here are just the remains of what some animal, probably a coyote, carried off. I can visualize the deer's skeleton somewhere nearby, amidst vastly more bloody and trauma.

The few tufts of fur and flesh I came on yesterday now take on new meaning. They are almost certainly parts of this same deer. Death in the forest isn't neat and tidy.

New ice covers what had been open water on the stream; black but densely flecked with inch-long, white ice crystals; slivers like the remnants of shattered stars.

After witnessing death my morning dip in the quarry feels cleansing: leaving the sense of death behind me in the cold, musty water under the ice; emerging into renewed light and life above the ice.