View journal entries from other months

In August 2013 I moved to Plainfield, Massachusetts, to the foot of Deer Hill/West Mountain, on the edge of the valley of the Westfield River. The journal below is my story of getting to know my new home: the land that stretches up the side of the mountain behind my house.

The snow is a little softer than it was a few days ago right after the rain followed by cold; but underneath the it’s so hard I can walk across the surface in my boots and almost never sink in more than a couple of inches. Every once in a while the snow gives way under my foot and I’m up to my knee in the snow, but it’s rare. Even the deer, with their small, sharp hooves, can sometimes stay on top of the snow.

At the edge of the hemlock ridge, scattered across the icy snow, are long tufts of brown fur and a few bits of flesh. Some animal killed another in order to survive. The energy of that final struggle seems to hang in the still, quiet forest.

After yesterday’s rain and last night’s below freezing temperatures my snowshoes barely leave a mark. Shards of ice, fallen from the trees above, lie thickly scattered over the snow. All sparkle alike in the sun.

Two days ago the snow was soft, dry and powdery; today it’s dense and heavy, saturated with water. There’s 20 inches of snow on the ground but my snowshoes only sink in a couple of inches. Looking up, yesterday’s delicate white on every branch and bough is gone. The hemlocks are dark once again, but their boughs shine with frozen moisture and a slight breeze sets them to rattling and crunching like the snow under my snowshoes. But mostly the air is still and gray; thick with cold, raw dampness. The forest’s not as pretty as it was a few days ago, but this is what early spring looks like.

A single flake floats down past the dark bark of a hemlock tree. Another follows a few moments later, then a third and a fourth, drifting silently down from the pale gray sky. Slowly, slowly more start falling and the further trees turn pale and soft. Silence is replaced by a soft hissing and tapping. It’s snowing steadily now; small flakes of the sort that can fall all day, laying down yet more snow on the already deep layers spread through the forest.

A sudden breeze at sunrise: the wind builds in the distance, sweeps by, and passes on, leaving snowflakes drifting down from the trees. As the sun climbs higher the gusts of wind come and go, each gust seeming like its own independent entity; comets streaking through the air, followed by trails of swaying, creaking trees. Then silence returns save for the far off sound of gusts plunging over other hills.

And I thought the forest was white before? The storm clouds yesterday spread a foot of snow through woods already white to the treetops. The stream is now just a small white valley running through the white forest. Somewhere below, the water is still flowing and every once in a while I hear its muffled sound slipping up through; mostly I just hear silence. The stillness of the forest is soft, staggering, exhilarating, beautiful. I spend long stretches just standing and listening, before continuing on my walk

Each step I take feels deliberate, even ponderous. I pause to let one snowshoe sink deep enough to hold my weight, then lift the other high to take another step forward. Sometimes the snow all around me settles with a soft “wumph,” shaking branches sticking up through a dozen feet away. A sudden gust sets the ice and snow covered trees to rattling and creaking as their branches knock against each other and their trunks bend under the weight of snow and wind. The wing beats of a blue jay rattle the air as he flies between the treetops high overhead.

Ever so gently and softly, the storm has begun. I can’t see the snowflakes in the pale dawn light but they brush against my face and murmur in the forest all around me. Under the hemlocks the sound is barely audible as the new snow lands on the snow-softened boughs high above me. Amongst the oaks and maples the sound is a little louder as the flakes tap on the tree trunks. But in the beech grove the sound is almost loud as the snow rattles and taps on the dry leaves still hanging on the trees, golden-tan amidst the gray-brown-white forest. But the calls of a flock of chickadees are shouts by comparison. Even the loudest snow is quiet.

With my vision wide as I walk, the forest seems alive and in motion around me. Every falling snowflake, every tree and twig seems bright, clear and filled with energy; un-muted by the beautiful, soft mist of falling snow.

The sky overhead is blue but tiny flakes float in the sunlight, sparkling and glittering with a soft, almost surreal beauty. The twigs, branches, and beech leaves are wrapped in a haze of frost, the source of the sparkling flakes. Looking east, the whole forest is hazy white, glowing warmly in the sunlight. A diaphanous mist veils the horizon and the sun climbing through it turns from bright summer orange to pale wintry yellow.

The birds are quiet this morning, tucked away, maybe, in various crevices, trying to stay warm on this cold, cold morning. But the stream is still flowing; I can hear its watery sounds seeping up through the thick white covering of snow and ice. In a few scattered places black windows open down to the cold, flowing water below.

The forest is still and silent this morning, yet it’s dense with stories for me now. Lying back on the snow, my eyes closed, the quiet is so complete the soft hiss of my own body is all I hear. Then the delicate “chips” of chickadees come down through the trees; single notes: “Here I am. Where are you?” The crow’s call is more raucous but gone soon as he flies over the forest. Then a woodpecker starts in and soon a red squirrel let’s fly with his ranting, vibrating chirr. Each is a small story, a small drama, happening right now: community, food, territory, and much more; lives carried on in the forest home they know well.

The forest is full of stories for me now too. When I set out on my morning walk I’m no longer exploring new places with every step. Instead I pass the fox’s den by the rock pile, remembering the fox’s tracks on new snow. Then there’s the small, narrow clearing where the sun shines in a little after sunrise; a good place to pause and warm myself near the end of my walk. I cross the stream at the place where in summer the water’s deep enough to bathe, and go up the hill through the grove of young black birches where both the ground and the treetops were brilliant yellow last fall.

Such stories and memories, both literal and mythological, are how cultures around the world have rooted themselves in the land, from the song lines of the Australian aboriginals to the Biblical stories laced with names of mountains and valleys; to a bridge in nearby Concord, Massachusetts where we tell the story of the start of our fight for freedom from the British. To those for whom these stories matter most, the particular place is an essential element; these places and their stores are central to who they are, where they call home, and where the think of themselves as being from.

The old place names, bestowed by the people who lived there rather than by explorers arriving from afar, preserve these stories. Native Americans did not name a river for a famous chief who lived far away, their names meant “the place on the river good for catching herring,” “the place where the salt water and fresh water meet,” and “the place to unload canoes,” but also the places tied to great stories of their people; what I might call myths but only because they are not my stories.

So this land is becoming for me: a place filled with small stories and memories, even after only six months living here. But I am not the first to live in this place, to call this land home. Near where I sat on the edge of the hemlock ridge to watch the sunrise this morning are some strands of barbed wire buried in a tree; a reminder of when this land was a farm pasture. A little later on my walk I pass the big oak tree and imagine a farmer stopping in its young shade, a dog maybe panting at his side in the August heat, both pausing for a rest before continuing on up, to bring in the cows or sheep grazing in the upper pasture. Such simple acts and the memories they formed are what made this place home for them, and my simple acts are making it home for me now; not pieces of paper on file in the registry of deeds down in Northampton, recording when we owned this land according to the laws of our society. How humans have apportioned the land and decided who gets to use it has changed vastly over time. How we come to think of some particular places as our home has changed a lot less, it seems to me. And I suspect the wild animals know the land in a similar way: remembering where to find food, where to find shelter, where it’s shady in the summer and warm in the winter. 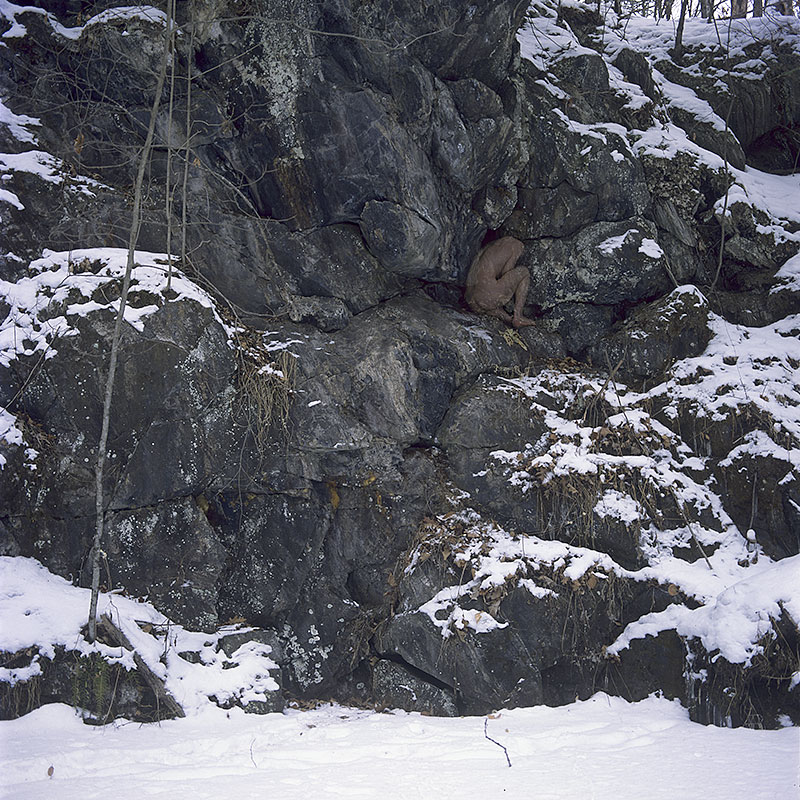